As the Chinese proverb says, “The insider knows the ropes, while the outsider just comes along for the ride”. The technologists in the blockchain industry (yes, in 2021, a phrase no longer valid just in the self-styled wantrepreneurs’ wild dreams) certainly have a long way to go in explaining if the ropes are for taking the new rich to the moon, or leading a social change believed in by many.

Here is such an attempt to call for more software developers to join the movement to lead this social change.

Ample articles are explaining how Blockchain works technically, but rarely can one explain why it matters without resorting to opinions and sometimes in almost cult-like languages.

In an age of widespread physicalism, where anything other than natural science and mathematics is suspected of being non-scientific, it is sadly understandable why people find it hard to grasp the impact brought about by Blockchain technology. Because its full potential is only explainable through the sciences of human action, best studied in the magnum opus of the Austrian economist and philosopher Ludwig von Mises, where using rigorous deductive reasoning Mises proved that for mankind to thrive and prosper peacefully, only a society respecting property rights has the chance. Based on this observation, a different theory of contract developed by Mise’s later disciples Murray Rothbard and Stephan Kinsella shows that a complete legal system can be built entirely based on title transferring of property rights.

But without the state how can we protect property rights? If we look back at the monumental development in history, a set of laws called The Twelve Tables (aka Law of the Twelve Tables) was inscribed on 12 bronze tablets created in ancient Rome in 451 and 450 BCE. By bringing the rules publicly displayable, it brought an end to the long social struggle between patricians and plebeians where everyone can be assured of what’s theirs and not theirs and the punishment if they didn’t obey the same rules. Subsequently, the idea became the foundation of the Roman law tradition.

In the domain of the open Internet, where its subjects are sometimes dubbed netizens, Blockchain provides a technical means for creating the indestructible and irrefutable digital “twelve tables”. The difference is that when in dispute instead of being hurled off Tarpeian rock or capital punishment, the only remedy is to transfer some titles of property rights using the “smart contracts” (computer language that is specialized in the domain of property title transferring) deployed on Blockchain.

The case for Blockchain technology is thus clear: by bringing more property listed on the Internet, implementing rules and regulations in smart contracts, a peaceful, cooperative, and prosperous society for the netizens is being built without the state(or big tech).

Your netizen “passport” might be more valuable than your state passport sooner than you think.

It is important to highlight that what’s described previously is already happening, despite the libertarian theory of contract is yet to be appreciated by the mainstream.

There are several types of property being listed on the Open Internet: native-born, by proxy, and by financial engineering. And these are the cryptocurrencies we often refer to, a use case of Blockchain technology.

These are the assets that originated on the open internet, usually, they represent a unit of account of the underlying Blockchain, including Bitcoin, Ethereum, well, also dogecoin (aka. dog money).

Blockchain technology not only can provide a unit of account for its native assets, but it also can provide assets register for proxying “non-native” assets such as fiat currency, gold, real estate, or securities (company shares and bonds), etc.

Those are also called stable coins, contrasting their stable exchange value by design against native-born assets. Other types of proxies, such as real estate and securities face their challenges coming from the state and regulations, and still in relative market value.

Financial engineers are increasingly interested in applying their know-how in Blockchain technology. A new industry called decentralized finance has witnessed sustained growth since its inception in 2017, and an explosive one in 2020, illustrated from this graph: 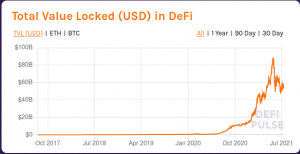 These financial services ranging from borrowing and lending through the native or proxied assets; re-creating or re-imagining traditional financial derivatives such as options, swaps, insurance, etc.; providing decentralized exchanges without relying on a centralized service operator; re-imaging how payments could work; or sometimes downright “yield farming” the risks associated with the speculative activities on Blockchain.

Due to the free-to-participate nature of Blockchain, so long as the wealth represented on the open Internet continues to grow, decentralized finance will make its way no matter how one thinks about it.

With the dollar amount of digital assets listed on Blockchain broke its record several times, we also have experienced at least two booms.

The first round to many knowns as the ICO bubble (initial coin offering) occurred in 2017, and reached its peak during early 2018:

The projects at that time raised funds with their assorted token names all have the “whitepapers”, either explaining dazzling technical solutions (how about the Internet Computer), or a utility token like the Ethereum movie venture coin, some may not even have a use case. Many are dead, some still developing today.

The 2020 DeFi boom though come with projects much more focused on financial innovations, an example of it is yield.finance, “an aggregator service for decentralized finance (DeFi) investors, using automation to allow them to maximize profits from yield farming”, with a market capitalization of just over 1B.

The social change brought about by Blockchain technology is real, and the open Internet will look even more different than today where more wealth will be listed virtually on the Internet instead of any government registry.

Experienced developers are well equipped to join this change, with only a bit of learning of a few new programming languages, you can easily get started. The real needed change is the mindset, to trust open systems and rules to regulate our society, wealth, and development.