In previous part, I described what is open source organization and its various design patterns. In this part, I will describe some example that puts the theory in practice. 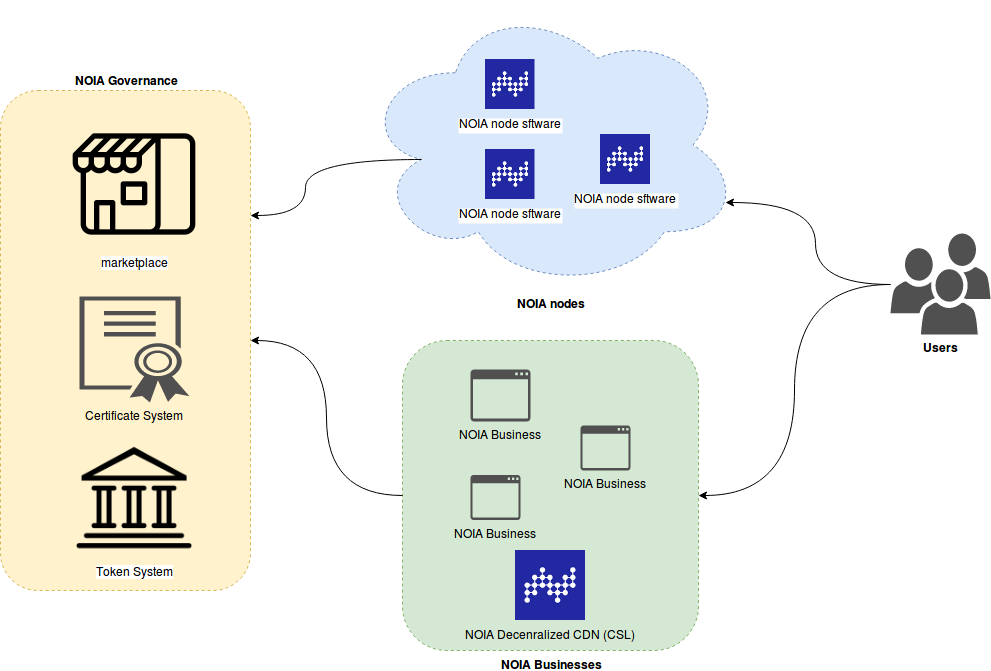 NOIA network is a open source organization. NOIA governance 2) NOIA governance github repository is hosted on Ethereum, and the nodes running NOIA node software are the collaborators. NOIA governance is consist of a marketplace, a certificate system and a token system. With the tokens, any business could hire those nodes for a period of time under the governance rules from the marketplace. And the certificate system allows businesses to evaluate nodes quality of services, and then issue or update a smart contract certificate to the nodes. For example, a experience level system akin to ones in the video games could be created to encourage nodes to work more for the businesses. The versatility of the node software, the flexibility and robustness of the governance rules determine the amount of applications one could create out of the NOIA network. As a piloting effort, the NOIA team uses these nodes to build the first decentralized content delivery network (CDN) and content scaling layer (CSL) 3) How NOIA Network is Decentralized .

Voting, especially public voting, would especially benefit from using open source organization pattern. It would help voting to be more transparent, more secure against fraud and less costly to maintain.

In order to create a open source voting platform organization, we need these collaborators:

The voting governance consists of:

The voter identification systems can be either government sponsored digital ID systems, or private systems that implement identification procedures such as KYC.

To start a vote, the voting sponsor sends a initiative to the voting booth. It also needs to select a list of voter identification systems that the voting approves. It takes care of reaching to the potential voters. It may be neutral or may be not. Any one could join as sponsors, in order to promote different sides of the resolutions.

To vote, the voter uses the voting client software to sign their votes with their digital ID approved by voting they participate. The voters may take the signature to the sponsors that support their sides, in order to let the sponsors fund the transactions on the blockchain, or the voters may pay by themselves.

For a voting, a well balanced sponsors distribution and no complains from voting observers and transparent voting results, could serve the public utility without the need of relying on a single third party to host the event.