It is necessary to point out first that, there is no innate superiority in open source philosophy, instead its quality vary greatly from project to project. I do not hold neither an utilitarian view that open source philosophy is better suited than the other in certain situations, since that would imply that a hypothetical omnipotent power could know exactly how much open source we need in our world. Instead I believe that the drive behind choosing open source way or not ultimately come from individuals, their differences in their upbringings, culture and genetics form the basis of their preferences in sharing or guarding the fruit of their creations. The diversity of the population, the level of technological development and the political environment together continuously shift the balance between open and non-open source ways.

In early days of computing (1950s and 1960s), software was distributed together with the hardware, allowing its owner to freely modify the code. Since there were no need for large-scale operating system in simpler hardware, and the adopters were largely from universities where knowledge-sharing is a culture, the open source way was dominating.

During the 70s, as the production costs of software were increased dramatically relative to hardware, along with the political changes including recognizing software as copyrightable and deeming bundling software with hardware as anticompetitive, a fast-growing private software industry was born and suppressed the growth of the open source software. Not until the arrival of the Internet, we were finally being able to distribute copies of open source software at almost zero cost across the globe. It is almost coincidentally during the same period the GNU Project 1) https://en.wikipedia.org/wiki/GNU_Project , from which the foundation of the free software was built, was born. And the rest is history.

Then during the mid 2000s, AWS 2) Announcing Amazon Elastic Compute Cloud (Amazon EC2) – beta , Google App Engine 3) https://en.wikipedia.org/wiki/Amazon_Elastic_Compute_Cloud came into existence. Along with mobile computing, people start to own more than one computing devices, so it became more convenient to the users using cloud to host more and more services. The original open source movement objective, to distribute software freely, becomes less of value in the cloud computing world to the end users. And even worse, closed source projects can freely use open source libraries and host their software on the cloud without ever needing to give anything back. That gives closed source platforms competitive advantage over open source software. And no wonder there is a persistent declining in the interest of term “open source” 4) 20 Years on, Interest in ‘Open Source’ is Declining 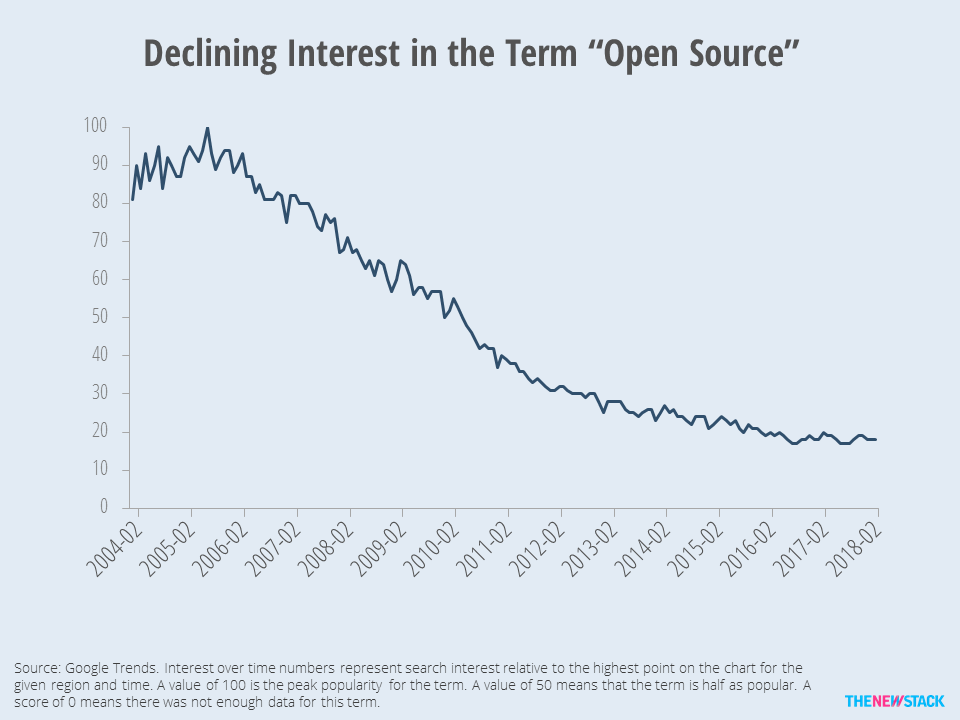 So what will bring back the Yin Yang balance to the ownership of the software human created?